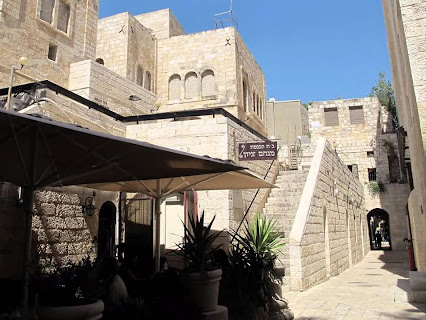 Netanyahu’s constant talk of agreeing to a “demilitarized” state for the Arabs is complete nonsense on the face of it.

What does “demilitarization” mean, anyway? It supposedly means that the Arabs have a police force but not a military.

First, a hostile police force will (and in PLO-controlled areas, this has always been so) surely gladly harbor hostile military, i.e., terror forces, violating all treaties.

Second, a hostile police force is itself a hostile military. The difference is largely semantic. The same gun that can be used to maintain law and order in an Arab village can be turned against Jews in a terror attack. This has occurred countless times in terror attacks against Jews in the Holy Land. Instead of responding with harsh retaliation, cancelling all treaties, and retaking those villages from the PLO, the government looks the other way, continues to send money and guns to the PLO, and dismisses the attacks as isolated, unrelated incidents.

Third, the Arabs themselves would be much better off under Jewish control than under PLO/Hamas thugs. Although in the long term, everyone would be better off if the Muslim Arabs in the Holy Land would simply immigrate en masse to a country like Qatar, whose leaders have sent so much money to sponsor the PLO and Hamas.

If Jews aren’t in charge of a given territory, terrorist militias will inevitably be there.

Rather, Netanyahu’s “demilitarized” language is an act of tremendous cowardice, in which he makes a fundamental concession to the long-discredited radical, left-wing notion of mass land surrender to the enemy as a form of “making peace”. Even after all the misery and bloodshed that previous deals have brought upon the Jewish people, Netanyahu agrees to the “Two State Solution”, to (even more and a lot more) “land for peace”, he just has an itsy bitsy condition.

But since it is impossible for the foolish condition of “demilitarization” to be fulfilled, you can be sure it will be forgotten once the land is surrendered, G-d forbid. We saw a similar response after the IDF redeployed from Gaza: Once military control of Gaza was first ceded, the IDF didn’t retake it when the treaties were inevitably broken and it was used as a base to attack Jews, as everyone knew it would.

Note also how towards the end of the most recent war in Gaza, Netanyahu declared that Gaza must be demilitarized as his condition to a “ceasefire”. Yet days later, there was a ceasefire without any pretense on the enemy side of agreeing to this condition.

Netanyahu is surely fully aware of all this, yet he continues preaching this madness. So in fact, Netanyahu is a traitor, plotting to cravenly surrender even more vast swaths of our G-d given land to our sworn enemy so they can attack us even more, G-d forbid.

And that’s fine, because it will be “demilitarized”.

But what does this mean for us? Hashem is sending a message to all Jews: Time and again, secular leaders and the secular values they embodied have led to disaster for the Jewish people—Begin, Shamir, Sharon, and for three terms now, Netanyahu. Don’t trust in apparently well-meaning but secular leaders. Deliverance will never come from them.

True courage and leadership against our enemies can only come from a leader of faith, one who rejects the zeitgeist and embraces only true Torah values, who fears Hashem and is proud to declare His Name, who reveres the holiness of the Land and supports the mitzva of settling the Land, and who is outstanding in his love of his fellow Jew.